Kwasi Kwarteng is rolling the dice on the country’s future today by unveiling the biggest package of tax cuts in three decades in a bid to end the UK’s ‘cycle of stagnation’.

The Chancellor is presenting an ’emergency Budget’ to the Commons with slew of dramatic measures designed to boost the economy.

He kicked off by hailing the freeze on energy bills at a typical £2,500 for households, saying the government was determined to help with the cost-of-living crisis – even though he admitted the price tag will be £60billion just for the first six months.

But Mr Kwarteng stressed there was a longer-term challenge in Britain that needed to be tackled. ‘Growth is not as high as it should be,’ he said. ‘We are determined to break that cycle. We need a new approach for a new era.’

Dozens of low-tax and low-regulation ‘Investment Zones’ are being created across the country, with new startups enjoying breaks such as exemption from business rates.

In an intervention the scale of which rivals the Covid response, Mr Kwarteng reversed the national insurance hike, as well as scrapping a huge planned increase in corporation tax and limits on City bonuses.

But the shock and awe tactics are expected to go even further, with aides promising ‘rabbits’ among 30 policies.

What is Kwasi Kwarteng announcing today?

Action to reduce stamp duty seems highly likely, while there is strong speculation that the 1p cut in the basic rate of income tax could be brought forward to next year.

The barrage is not technically a Budget, but a ‘fiscal event’ – meaning that controversially it will not be accompanied by any of the usual independent costings from the OBR.

And economists have voiced alarm at the massive borrowing that will be required to cover the hole in the government’s books. The two year freeze on energy bills for households and businesses announced earlier this month could cost more than £150billion by itself, while the tax cuts could add a further £50billion to the tab.

The respected IFS think-tank suggested it would be the biggest tax move since Nigel Lawson’s 1988 Budget, when Ms Truss’s heroine Margaret Thatcher was PM.

The dangers of ramping up the UK’s £2.4trillion debt mountain while the Ukraine crisis sends inflation soaring have been underlined by the continuing slide in the Pound against the US dollar, reaching a fresh 37-year low of barely 1.11 this morning.

Markets have pushed up the government’s borrowing rates to an 11-year high.

In August and September so far the 10-year yield on government gilts has seen the biggest increase since October and November 1979, emphasising the nervousness of markets about the situation.

However, Ms Truss and Mr Kwarteng argue that ramping up economic activity can make up the difference, pointing to decades of lacklustre productivity improvements.

The Bank of England pushed up interest rates by 0.5 percentage points to 2.5 per cent yesterday, the highest level since 2008. But it surprised many by stopping short of a bigger increase, suggesting that UK plc is already in recession. 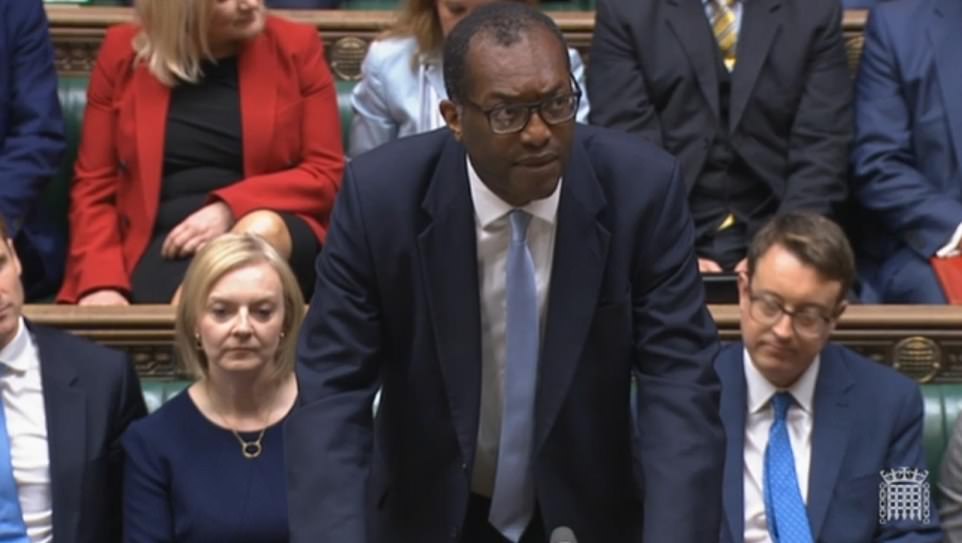 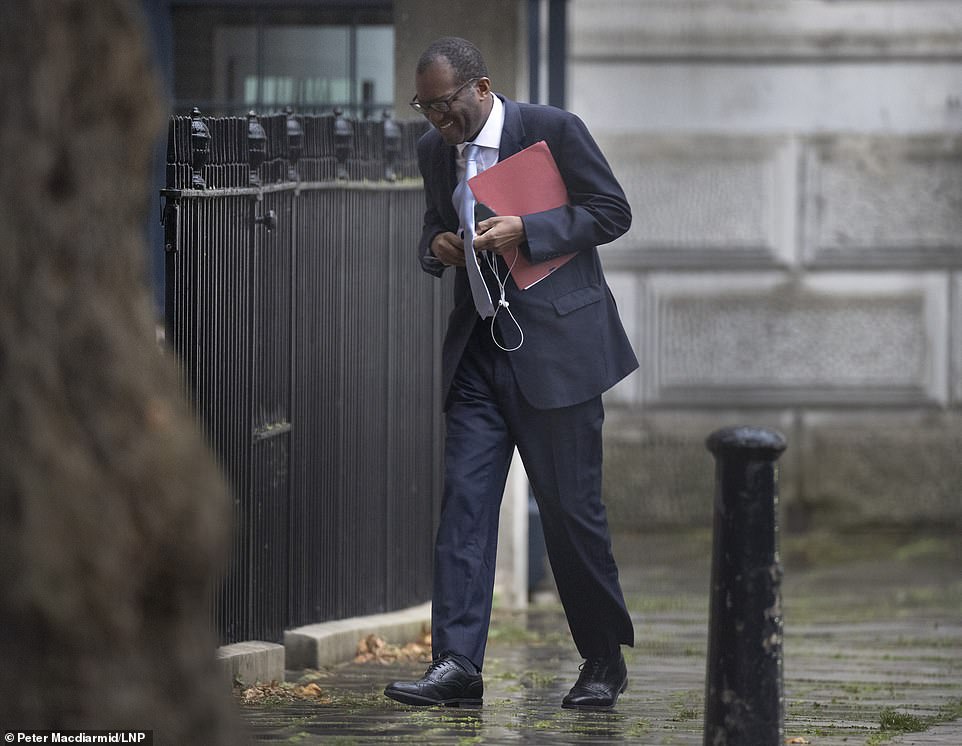 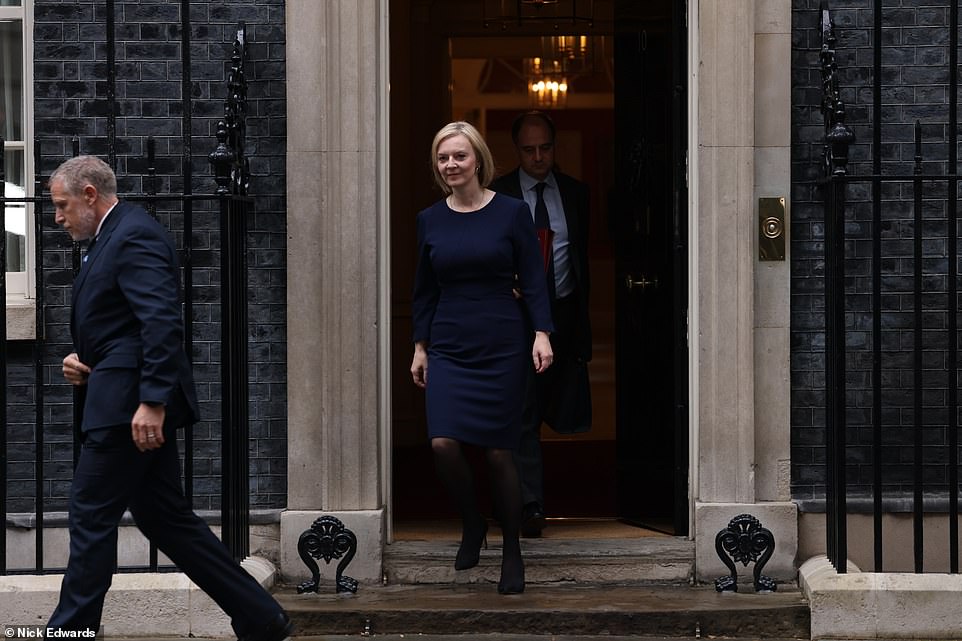 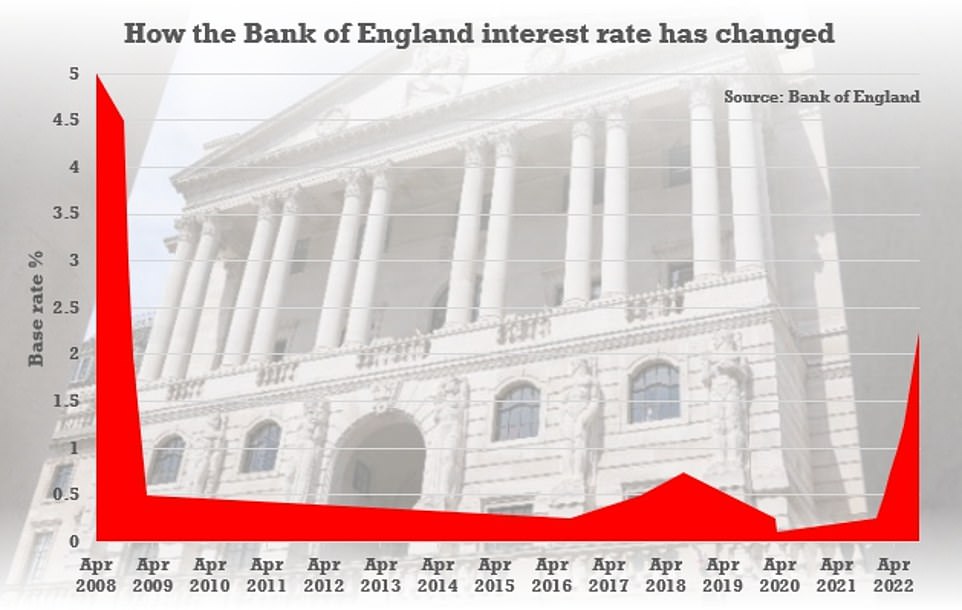 The Bank of England raised interest rates by 0.5 percentage points yesterday, in an effort to contain rampant inflation 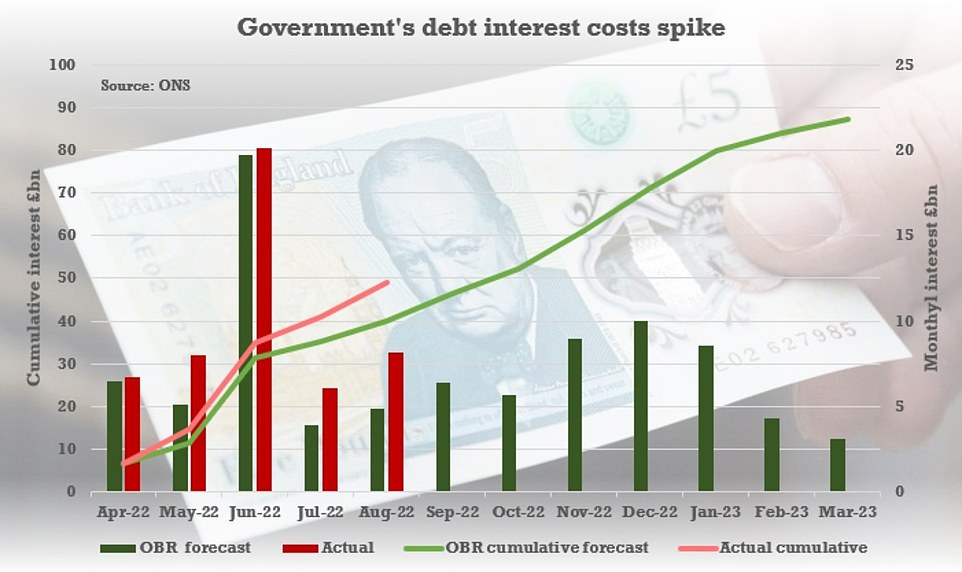 The interest bill on the UK’s £2.4trillion debt mountain hit £8.2billion last month, the highest figure for August since records began in 1997

Mr Kwarteng told MPs: ‘Growth is not as high as it needs to be, which has made it harder to pay for public services, requiring taxes to rise.

‘This cycle of stagnation has led to the tax burden being forecast to reach the highest levels since the late 1940s. We are determined to break that cycle. We need a new approach for a new era focused on growth.

Sent out to tour broadcast studios this morning, Levelling Up Secretary Simon Clarke rejected the suggestion that the economic plan was a ‘gamble’.

Calling it a ‘game-changing financial statement’, he said the measures were designed to return the UK to the level of growth seen before the financial crash in 2008.

He told Sky News that Mr Kwarteng would ‘tackle what is a record high tax burden on families and businesses, reflecting clearly the fact we’ve gone through some extraordinarily difficult years but setting out a fundamentally new approach to go for growth to make sure that we we win the argument that a more successful enterprise economy is good for the whole of this country’.

Today’s fiscal statement had been billed as a ‘mini-budget’, but yesterday the Institute for Fiscal Studies said it would amount to the biggest tax giveaway in three decades.

Then-chancellor Lord Lawson delighted Conservative MPs in 1988 when he used his budget to slash income tax, cutting the basic rate by 2p in the pound and scrapping all higher rates above 40 per cent.

IFS director Paul Johnson said: ‘This will actually, we think, be the biggest tax-cutting fiscal event since Nigel Lawson’s budget of 1988. So it may not be a budget but in terms of tax cuts it is going to be bigger than any budget for more than 30 years.’

Mr Johnson said that with £30billion of tax cuts, the Government’s deficit could hit around £100billion by 2025, which would ‘put debt on an unsustainable path’.

A big increase in economic growth would make things easier but that was not guaranteed, he added.

The IFS also warned that most households will be worse off this year despite a massive package of state support to deal with the cost of living crisis. It reckons that a median earner will be £500 worse off in real terms than they were last year – a cut of around 3 per cent in their income. Higher earners will be £1,000 worse off.

‘I am afraid that the energy price shock has made us poorer and we will be worse off,’ said Mr Johnson. ‘The Government can spread the pain over time and between people but in the end it is not going to be able to magic it away.’

The Chancellor will also announce that officials are in talks with 38 council and mayoral areas to set up ‘investment zones’. Each zone will offer tax cuts for businesses to help them create jobs and improve productivity.

The areas will have less strict planning rules and there will be reforms to environmental regulations to make it easier to build more houses and commercial property.

Mr Kwarteng will also announce legislation to accelerate the delivery of around 100 major infrastructure projects, including transport, energy and digital schemes.

This could include scrapping rules protecting rare and endangered species. The Chancellor will also use his ‘fiscal event’ to set out details of how the state will fund an energy price cap announced by the Prime Minister earlier this month.

Downing Street insisted that Liz Truss remained committed to the 2019 Tory election manifesto, despite making a sharp break with the economic policies of Boris Johnson’s administration.

She told business chiefs in New York this week that she wanted ‘lower, simpler taxes in the UK to incentivise investment, to get more businesses going in the UK’.

She is said to believe that cutting stamp duty – paid when buying a property worth more than £125,000 – would drive growth by encouraging more people to move, as well as helping first-time buyers.

The PM said on Wednesday: ‘We won’t be raising corporation tax, as was planned. We’ll be reversing the national insurance rises which took place earlier this year. And the Chancellor will be announcing various other simplification measures.’ 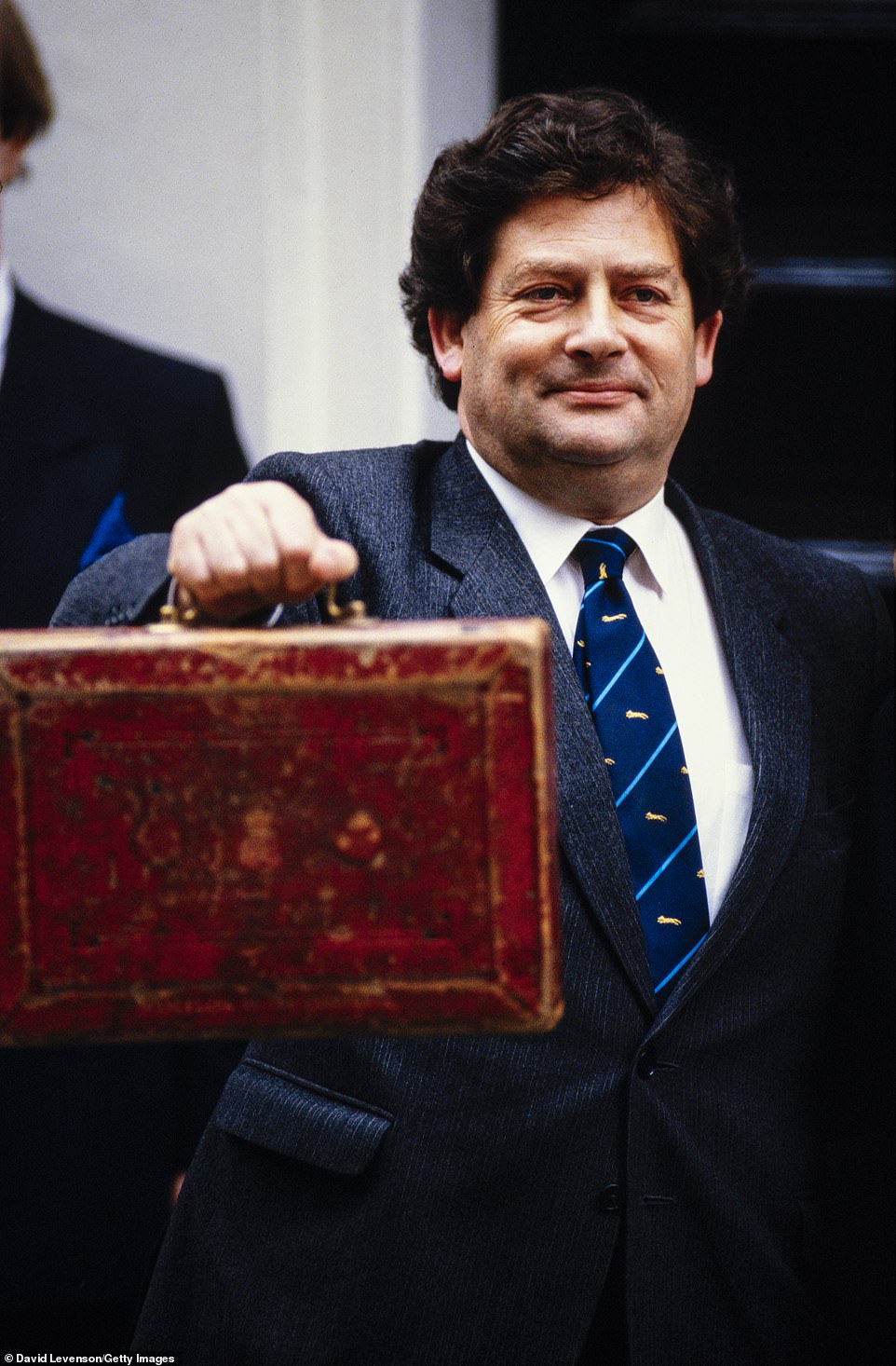 Lauded: Nigel Lawson with his Budget red box. The former Chancellor is pictured outside 11 Downing Street. Then-chancellor Lord Lawson used his budget to slash income tax, cutting the basic rate by 2p in the pound and scrapping all higher rates above 40 per cent in 1988 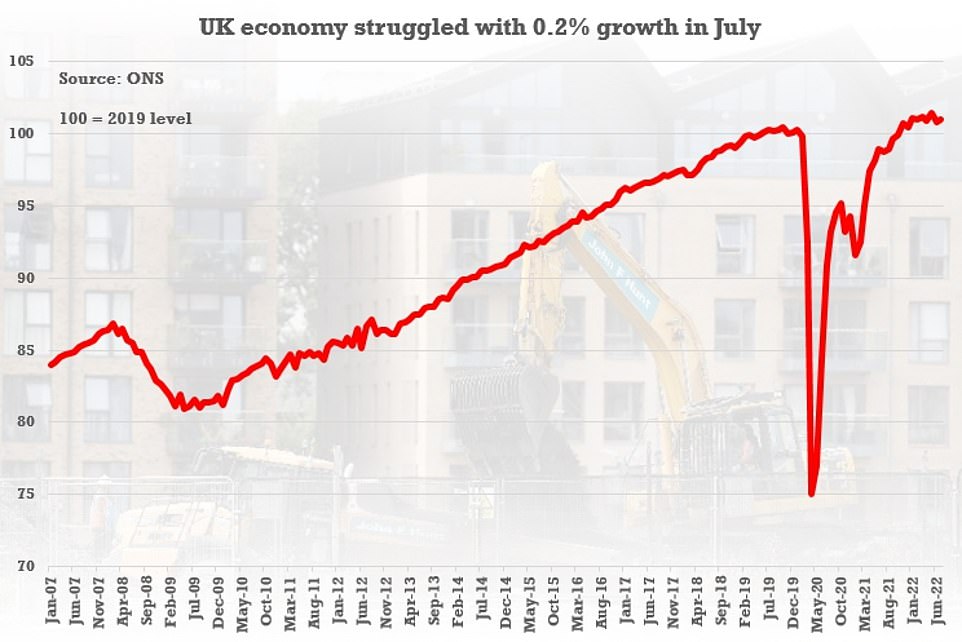 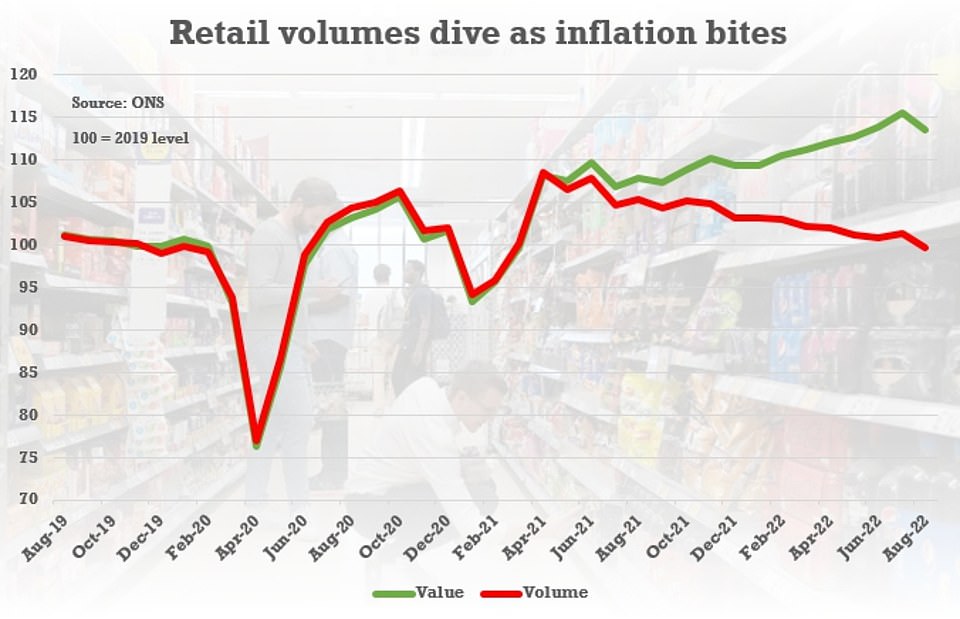 The Bank reflected on a host of downbeat data recently, including GDP figures for July and retail sales for August